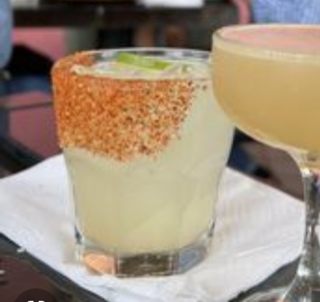 BACANORA, the spirit from just south of the Border.

With: An introductory Cocktail, The “BACANORITA”.

(My attempt at Adrian Galindo’s recipe, mixologist at Bacanora on Grand Avenue.)

.75 oz. Orange Liqueur     (Please…no Triple Sec.  Cointreau and Grand Marnier are the traditional orange liqueurs, but when I want something with more orange and a little less heat, I use Patron’s Citronge, or Naranja, Agavero or Grand Imperial orange liqueurs…they will all change the drinks profile…see what your tase buds prefer)

Rimmer: Tajin (found in any Mexican food section), or a sweet yet spicy pepper blend (dried orange or lemon zest, mixed with dried chiltepin pepper, ground & powdered with a mortar and pestle, then mixed with at least an equal portion of raw sugar, to taste)

Measure out Tequila, Bacanora and Orange Liqueur into a Pint Glass, (multiplying portions if making a batch…for a party, use a 32 or 64 oz pitcher).

Add lime juice and agave nectar, stir, and adjust to your taste. Personally, I want to taste the Tequila and Bacanora notes, get a little pucker from the lime, and have some deep orange notes added, but not turn it into an orange juice drink. When you have your mix adjusted to your own taste, prepare your glasses.

I like to mix my rimmer and put it into a shallow bowl. You can either wet the entire glass rim about ¼” down the side from the top, by pressing a cut lime slice onto the rim, pushing down and turning it to wet the entire rim, or for something different, you can lime-coat a half circle from the rim down on one part of the glass. Dip the moistened part of the glass in the rimmer to pick up a light coating.

Carefully fill the “rimmed” cocktail glass with ice (A very large cube will give you a full strength drink to appreciate the flavor notes, but crushed ice will dilute and give you a lighter, easier drinking cocktail and it is particularly fun in the heat).

Add your drink mix, and garnish with a lime wheel, or a flamed orange or lime slice (grill, or torch the rind and fruit.) 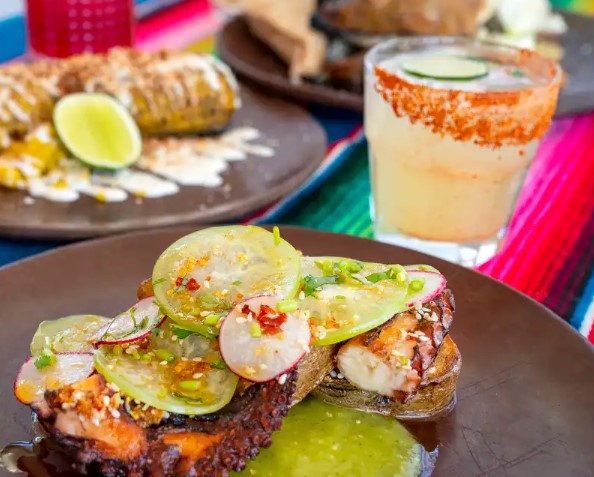 BACANORA     is a spirit obtained from agave, and is a regional sub-classification of Mescal, made only in the State of Sonora that sits below our border, and is in its own way, similar to tequila, mezcal, and raicilla. The difference between these spirits is in the type of agave with which they are produced, the location they are grown, and the actual production methods.

Tequila, which is highly regulated, uses only Blue Weber Agave, and can only come from the area around Tequila, chiefly in the states of Nayarit and Jalisco, but also Guanajuato, Michoacan, or Tamaulipas.

Mezcal is produced throughout Mexico and surrounding countries, and commonly comes from about 20 different agave that have varying sugar levels and flavors unique to their type, and whose flavors are affected by the site, soil and elevation.

The state of Sonora produces a huge number of the most common Maguey type used in Mescal, the Agave Angustifolia, commonly known as Maguey Espadin, and in Sonora specifically referred to as Maguey Pacifica. It is deep green in color, and as it grows and ages, gets lighter. The agave can measure about 4 feet high and 6 feet around. At maturity, it sends up a yellow flower on a stock growing up the middle, growing 2 ½ inches a day during the first week and an inch a day for the next three months. This growth slows but continues for nine months, with the interior holding the seeds that will sprout new agave. We tend to call both these, and the even larger giant Maguey Arroqueño (Scientific name: Agave americana), Century Plants, when this process is occurring.

This process usually occurs after 5 to 10 years of age, and allows the maguey to reproduce and be harvested for a number of uses, one of the most profitable now being the production of spirits.

You can find mostly silver or clear bacanora in the United States market, but Bacanora aged in wood is quite common in Mexico.

Bacanora started production as a crudely fermented beverage (pulque) from the agave heart, made by the indigenous Opata people. It was harvested wild, fire roasted with mesquite wood in pits, then mashed into a pulpy liquid and left to ferment. About five hundred years ago, crude distillation methods began to emerge and the first mescal was produced. Missionary Spanish priests introduced more formal distillation that increased the quality and strength of the beverage, and turned it into a true spirit, as it became popular throughout mexico and spread to Sonora. Local Sonoran mescal started being referred to as Bacanora, as an abundance of the Agave Pacifica or Espadin, grew wild around the town founded by the Jesuits in 1627 called Bacanora, establishing a reputation for the quality of the liquor made there.

The highest quality, small production Bacanora, is still produced in the traditional method.

Agave Pacifica is harvested through a process known as jimar (hee-mar). The “Jimador” cuts off the pointed leaves from the pineapple shaped core, or piña using a spear/spade like tool called a Coa.

These pina/cores are then split, and placed into specially designed underground ovens called mallas, to roast and soften the pina. This helps break them down to extract their juice and because of the wood used, they will take on some smoky flavor. If the producer uses a boiler rather than the wood oven, it will produce a less smoky Bacanora.

The cooked pinas are then crushed – traditionally in a “tahona”, a giant stone grinding wheel. Larger scale producers may use mechanical crushers to extract the juice and separate it from the fiber.

To ferment, the agave pulp is placed into barrels, combined with fresh water and covered air-tight, which begins the natural fermentation process, which can take from 6 to 12 days, depending on time of year and temperature.

The fermented juices are placed into stills and heated over mesquite fires. The vapor escapes as steam from the top of the still and goes through a funnel and cooling tube, which may be coiled. As the vapor condenses in the tube and becomes liquid, it will flow into a container as a raw spirit.

What differs in the production of Bacanora from other mezcals, is the method of the second distillation of the liquid, called “resaque”. During the resaque, the master producer, called a “vinatero” in Sonora, basically the “master mezcalero”, uses a container to collect the first distillate from out of the still: the high alcoholic content called the “Heads”. As soon as the Vinatero observes a group of small superficial bubbles in the liquid that flows, he changes the container. This next distillation is the Bacanora, with between 20 and 30 degrees of alcoholic purity. When he notices the bubbles disappear quickly, he switches to a new container, as the next discharge or “Tails” is composed almost entirely of water.

The last step is to adjust the bacanora and mix it with the “heads” to blend it to the desired alcohol level and taste, which results in a spirit that is between 40 and 50 percent alcohol.

The resulting agave spirit, Bacanora, is less smokey than most mezcal, a little more grassy in flavor, and a little sweeter in the mouth, and may show off peppery notes. I have found that it will appeal to many drinkers who just say no to Mezcal’s smokey flavors, and don’t get to appreciate the complexity that can be found in good Mezcal.

One of my favorite bartenders, Adrian Galindo, at Bacanora , the upscale Sonoran Restaurant on Grand Avenue (and James Beard nominee) named for the regional spirit (and their sister outpost Espiritu in Mesa), uses a combination of bacanora and blanco tequila to make his “bacanorita’, and reflect the flavors of Sonora.

“Particularly with the bacanorita, I wanted to make it as accessible as possible,” he says. “All it is, is a split base of bacanora and tequila, a good version of triple sec… then fresh lime juice and agave nectar to sweeten.”

The combination of Tequila and Bacanora delivers the best elements of a classic margarita, while adding some of bacanora’s more rugged, grassy charm, and just a subtle puff of smoke. Adrian uses agave nectar to bring out agave flavors, rather than just sweetening, as simple syrup would do. For the right amount of oomph, a rim coated with Tajin is an easy and lovely complement, but Adrian takes it further using a rimmer of sugar, citrus rinds, and dried chiltepin pepper to elevate this drink even further with the regional flavors of our Sonoran Desert. TRY IT!

Bacanora is readily available at Total Wine, and most mescal and tequila purveyors.

John Selman is a happy real estate broker/realtor at The Agency. He is a refugee from the Tech World, incuding Big Blue, SupplyandService.com, CadData, CU2Americas, and a former Managing Member of Barrel Wine Bars LLC, Malibu Village Wines LLC, and WineProGroup. He enthusiastically enjoys and irreverently writes, about food, wine, and homes. He is passionate about all three as well as grapes, good renovation, architecture, his family, his very needy Bulldog-Rugby, and most (but not always all) of his friends. John works with his customers buying and selling normal homes as well as Luxury Properties at The Agency, and loves what he gets to do every day. In his free time, he coaches paddling sports on Tempe Town Lake, occasionally visits his favorite old ski haunts and complains of aches and pains, avoids anyone carrying a rugby ball, travels up and down the coast seeking out great food & wine, looks for water to paddle SUP or outriggers, and laughs at his dog.

© John Selman 2021.
While some properties on this site may not be our exclusive listings, we have ongoing relationships with agents in those markets. Please contact us for assistance. The information presented on this site is deemed reliable but is not guaranteed. All information should be independently verified. Information presented on these web pages is deemed reliable but is not guaranteed and should be independently verified by the users of this site. ©2021 The Agency is a registered trademark . An Equal Opportunity Company. Equal Housing Opportunity. The Agency and John Selman are advocates for Fair Housing practices.